The Wizard is a Mini unlocked from Chests, Shop or Quests. The Wizard is an area-damage, ranged unit with low hitpoints and damage output. Appearance-wise, he has a dark brown beard and wears a blue robe. It costs 2 Elixir to deploy.

“Throw a fireball that damages enemies in an area”

The Wizard will deal damage to units in a "plus" formation. It will hit his target directly and any enemy that is one tile next to the Wizard's target in any direction will be affected by the attack.

The area of Fireball increases, with each direction increasing by 1 tile.

Any enemy that is hit from Fireball will be burned, taking 2 bonus damage over 4 seconds.

Any enemy that is hit by Fireball will receive 75% less healing for 2 seconds. 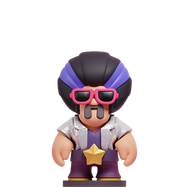