The Spear Goblin is a Mini unlocked from Chests, Shop or Quests. The Spear Goblin is a single-target, ranged unit with low hitpoints and damage output. Appearance-wise, he is a green creature who carries a wooden spear and wears a blue bandana. It costs 2 Elixir to deploy.

At the start of each round, the Spear Goblin will throw a spear in its lane, dealing 5 damage to the enemy hit. If the Spear Goblin is stunned before it throws its spear, the ability is cancelled.

Spear Toss will do 3 more damage, for a total of 8 damage.

If Spear Toss hits an enemy, the Spear Goblin's hit speed is increased by 70% for 6 seconds. 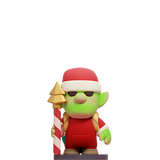