The P.E.K.K.A is a Mini unlocked from Chests, Shop or Quests. The P.E.K.K.A is a single-target, melee unit with high hitpoints and high damage output. Appearance-wise, she wears an armor that covers her whole body. In her head, she has 2 blue horns, and 2 completely blue eyes. She wields a blue sword in her right hand. It costs 4 Elixir to deploy.

P.E.K.K.A has a Passive ability that gives her a 25% chance to deal double damage, for a total of 6 damage per attack.

P.E.K.K.A's Heavy Blade deals triple damage instead of double damage, for a total of 9 damage per attack.

At the start of each round, the P.E.K.K.A will reduce the amount of damage that she receives by 1 for a short time.

If the P.E.K.K.A manages to defeat an enemy, she will heal herself for 2 health each second, for a total time of 4 seconds. This allows her to heal a total of 8 health over 4 seconds. 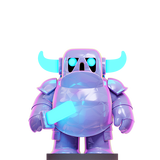