The Mini P.E.K.K.A is a Mini unlocked from Chests, Shop or Quests. The Mini P.E.K.K.A is a single-target, melee unit with moderate hitpoints and high damage output. Appearance-wise, he wears an armor that covers his whole body. In his head, he has 2 blue horns, and a triangular eye. He wields a glowing blue sword in his right hand. It costs 3 Elixir to deploy.

“Attacks have a small chance to deal 2x damage”

Mini P.E.K.K.A has a Passive ability that gives him a small chance to deal double damage, for a total of 4 damage per attack.

The chance to deal double damage with Shining Blade is doubled.

If Mini P.E.K.K.A attacks an enemy that has a Super ability, he will remove 3 Energy from that enemy.

“Deals 2x damage against enemies with Block or Shield” 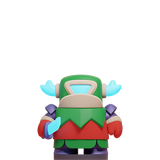