The Mega Knight is a Mini unlocked from Chests, Shop or Quests. The Mega Knight is a single-target, melee unit with high hitpoints and low damage output. Appearance-wise, he wears a black plate armor and a helmet that has a feather of the team color. He has two spike balls on his hands, and has a belt on his stomach. He costs 4 Elixir to deploy.

“Super: Stomp the ground to damage and stun nearby enemies”

Mega Knight has a Super ability that jumps up then lands on the ground, dealing 1 damage and stunning enemies in a 3x3 square around him. If there are no enemies close to the Mega Knight, he will jump to the closest enemy.

Skyfall will stun the enemy for an additional 2 seconds.

The area of Skyfall increases, with new area being a 5x5 square.

When Mega Knight is being attacked, he will generate 2 Energy. However, he will not generate Energy when he attacks enemies. 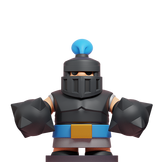