The Giant Skeleton is a Mini unlocked from Chests, Shop or Quests. The Giant Skeleton is a single target, melee unit with high hitpoints and low damage output. Appearance-wise, he appears as a colossal skeleton wearing a blue ushanka with a large gunpowder barrel on his back and a bomb in his hand. It costs 3 Elixir to deploy.

“K.O.: Drop a bomb that deals 3 damage and stuns enemies briefy in an area.”

When the Giant Skeleton is defeated, he drops a bomb that deals 3 damage in a 3x3 square after a 2 second delay. It will also stun any enemies hit from it for 1 second.

The stun duration of Boooom!!! increases by 1.5 seconds, for a total of 2.5 seconds.

The area of Boooom!!! changes from a "square" formation to a "diamond" formation, affecting any enemies that are up to 2 tiles horizontally away or 1 tile diagonally away from the Giant Skeleton. 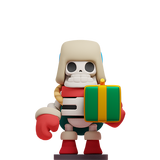