“Super: Zap up to 3 enemies, dealing 2 damage and stunning them briefly”

Electro Wizard has a Super ability that deals 2 damage to the 3 closest enemies and stuns them for 1 second.

“Zzzap strikes up to 5 enemies”

Zzzap can now affect up to 5 enemies instead of 3.

“Clash: grant 2 Energy to nearby allies in the same row”

At the start of each round, the Electro Wizard will give himself and his adjacent allies 2 Energy.

The stun duration from Zzzap increases by 2 seconds, for a total of 3 seconds. 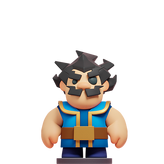