The Bowler is a Mini unlocked from Chests, Shop or Quests. The Bowler is a single-target, ranged unit with moderate hitpoints and high damage output. Appearance-wise, he is a blue creature who carries a boulder and wears brown pants. It costs 3 Elixir to deploy.

“Clash: Roll a giant rock straight ahead, damaging, stunning and knocking back any enemies hit.”

At the start of each round, the Bowler will throw a boulder in its lane, dealing 2 damage to all enemies hit, knocking them back 1 tile and stunning them for 1.5 seconds. If the Bowler is stunned before it throws its boulder, the ability is cancelled. The ability takes 1 second to cast.

Strrrike!!! can be used repeatedly within a round. It needs 4 Energy to activate.

Strrrike!!! stuns the enemies for an extra 2 seconds, for a total of 3.5 seconds. 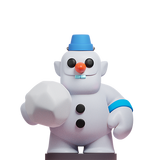