The Archer is a Mini unlocked from Chests, Shop or Quests. The Archer is a single-target, ranged unit with low hitpoints and damage output. Appearance-wise, she wields a small bow and wears a blue tunic while having pink hair. It costs 2 Elixir to deploy.

Archer has a Passive ability that allows her to target the enemy that is the farthest away from her.

When attacking, the Archer will target one additional target, but her hit per second will be decreased by 0.2.

If the Archer manages to defeat an enemy, she will gain 1 more damage per attack for a short time.

At the start of each round, the Archer's hit speed is increased by 50% for 7 seconds. 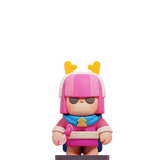